Camping, Catching, and... some other C-word 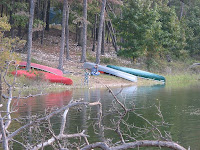 Okay, so alliteration is not my gift this evening. I'm not sure I have a gift this evening -- besides procrastinating my outline of II Timothy. Apparently my computer is in league with me because it is refusing to read my brand new SD card. My camera reads it. But my computer won't. And it has camping pictures on it...

The R2R interns and the IDT went camping this Saturday/Sunday at Beaver's Bend State Park in southeastern Oklahoma. We had a great time of canoeing and camping and hiking. It was a delight to wake up in the cool of the morn ("cool morning" doesn't exist in Dallas) and have quiet time by the lake, watching the fog drift gently... We saw lots of wildlife - deer, a walking stick, praying mantis, lots of spiders, and a crow that served as an alarm clock. Too bad he was sitting too far away for us to hit the snooze button!

Work at the office is busy as usual, but I was able to get some work done today. (On days that I don't get "work" done, I'm usually working on emails or phone calls as they come into helpdesk. That really is work too! I guess I need to figure out a better way to word this...) I love my job as helpdesk, but we really do need more staff! I can't keep up with it all.

Persecution and events in the world: It's overwhelming to me. Orissa is still suffering violence against Christians with other 13,000 refugees now in relief camps. Persecution is spreading to Chhattisgarh and other places. Flooding in Bihar, Orissa, and Uttar Pradesh has killed 200 and displaced millions. Today's media reported the killing of Christians in Mosul, Iraq. We've received so many updates and stories that they're all beginning to sound the same. I need a fresh heart.

Want to help? Sign up here to be part of the GFA prayer team!
Posted by D at 8:10 PM