Another team from GFA spent time at MissionArlington Monday morning, helping distribute clothes to those who needed it, clearing the way for more donations arriving for the hurricane refugees. 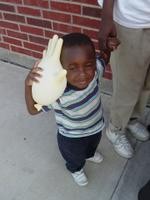 I mentioned James and his family in the last post--they arrived on a bus from New Orleans while the GFA team was assembling portable showers. You can see his new toy in the picture. As they climbed off the bus, James was looking terrified until one of the Arlington police officers rushed up with a plastic glove. James watched, skeptical at first, as the officer blew the glove up like a balloon, tied a knot, and drew a funny face on it. The parents watched, amazed, as the officer made the balloon talk to James and he smiled for the first time in days. Even after the officer returned to his duties and James and his family waited in line to get in the shelter, James was laughing and carrying on a conversation with his new friend. It was the first toy he'd had in a week.
Posted by D at 8:49 PM

A simple thing to do, but what a nice blessing it was to James and his family! God bless the officer for extending a bit of love even while I'm sure there were many other things that had to be done.