No, I'm not moving to Kenya. :) I was at Rosalie's house on New Year's Eve this year when we saw the news coverage about rioting and violence in Kenya. The breaking news that day was that a mob had burned a church with over 50 people trapped inside. The tallys rose across the country: over a thousand dead, over 600,000 without homes, nearly 400 churches destroyed. The violence died down in the first three weeks of January, but thousands are still living in refugee camps.

I have a couple friends working in Kenya - a college friend and the Chris, the missions pastor of my local church. Both have been involved in various parts of the relief work and it has made the news a little closer to home. Do you ever notice that? News about places you have friends suddenly becomes much more interested. Big K in Afghanistan (welcome back to the US, by the way) or Meg in Morocco or friends in Kenya... 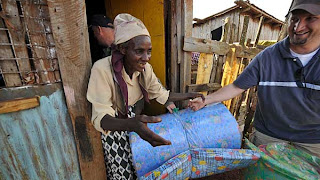 The April 6th edition of the Pentecostal Evangel magazine is entirely covering the Kenya situation. Chris (in the photo) had mentioned on his blog that the photo team had been there, so I was watching for that issue. They interviewed the native pastor of the church that had been burned -- he was rescuing children from the burning building, but then was attacked by the mob himself.

Here's a few links if you want more information:
In a sense, the violence in Kenya is like the tsunami that struck Asia. The violence may be gone and the TV cameras with in, but there are still thousands of lives and homes to be rebuilt. I know they would appreciate you prayers.
Posted by D at 8:31 PM

Hey! I just found you here! Great way to keep up and I"ll be back, thanks for the link, my friend, have a great day!